Why I Fire Alone

Why would I choose to fire my kiln alone? I get asked this question a lot, especially by folks who want to fire with me. It is a great question. I am not getting any younger. What are the benefits of solo firing? The group firing, whether with three or ten people, is what drew many of us to woodfiring in the first place. There is that camaraderie, the shared workload, the singular vision, the high experienced from the accomplished task of completing a firing together. Why would I, a 62-year-old woman, set off in the opposite direction? The answers are many; the rewards are amazing! I will set out three of these, and hopefully open a discussion for others to share their experiences.

First and foremost I am tired of managing a team, whether they be those that know my every thought or those who need to be guided through every step. I love having the freedom of being able decide what to do each day according to my clock and my body. I can pace myself. I can choose when to do physically demanding work, and when to do something else.

I want control over every aspect of the firing. I want to learn more about how my kiln works and what makes it tick. I want to see how different stacks, different types of wood, different environmental situations affect the firings. I want to understand it viscerally, not just logically or intuitively. I want this relationship ? of me and the kiln ? to be one between two different but in-sync forces.

I want to really see my work. I have been making pots for 46 years. My BFA is from Alfred (The New York State College of Ceramics at Alfred University). I studied with some of the greats in the world of ceramic makers. I feel that I have never been alone with my work. I haven?t studied it ? and asked myself why I am making it ? or at least not in a prolonged and compelling way. I believe that by interacting with every step of the making and firing of my work, I will have to confront what it is. As an artist who has repeatedly chosen clay as my medium, this is an important conversation for me to have with myself. By being alone with my work in this way, I can hear my inside voice speak loud and clear and I have no distractions to confuse the message.

How did I accomplish this feat of solo woodfiring? It was actually a comment by Linda Christianson that led me to figuring out how to do it. I have a Bourry-box kiln which was built by Donovan Palmquist of Master Kiln Builders. I researched and picked brains for three years before deciding that this was the type of kiln I wanted. I had a basic requirement that it had to fit into the small steel building constructed by my brother-in-law for this purpose. I have a small house on a small yard that butts up to my next-door neighbours and an elementary school in an inner suburb of a city with a reputation for being the lawyer capital of the world. This kiln fitted into the available space, and it didn?t emit billows of smoke that could attract the attention of some of those lawyers!

Linda has a Bourry-box kiln. When I told her that I was having problems firing my kiln, she said something to the effect of 'It is easy to fire. The Bourry is a hopper. Just load up wood in the hopper and it will burn down that load'. This was a basic tenet that I hadn?t learned after 30+ firings of my kiln. I had been so concerned with not creating smoke, which I thought was produced when I loaded up the wood on the hobs, that I missed the core design principle of my kiln. Two more well-placed comments got me in the right place for figuring out what to do. Gary Hatcher, another Bourry-box expert I consulted over the years, advised me to not to let the throat arch get blocked up with coals. Donovan Palmquist was so enamoured with my kiln after he built it, that he built one for himself. He told me that he found that holding the temperature at around 1090ºC (2000ºF) for six to eight hours improves the results enormously. Now I felt that I had the perfect combination of experience and advice to take the plunge into solo firing.

I thought that if I could keep the kiln above quartz inversion (573ºC/1064ºF), this would minimize the stress on the pots. I decided that I could fire the kiln in two stages. The first would be to fire above quartz inversion and lay on as much ash as I could while the draught through the kiln was fairly slow. This way I could get the finer ash to wrap around all the pots throughout the setting. The second stage would be to melt the ash and get the pots to the final cone I wanted, which is cone 11.

I tested the plan of firing the kiln to above bisque temperature, approximately 980ºC (1800ºF) and then filling up the firebox with heavy branches, difficult to split chunks, and otherwise undesirable wood. My idea was to bank the firebox overnight like a wood stove. I closed down the damper to about 2.5cm (1 inch), closed off all the primaries and secondaries, and left a small aperture in the lower stokehole to allow air to be drawn into the coal bed, which after 16 hours was higher than the top edge of the stokehole. I then went to bed for 6 hours.

The kiln cooled to 650ºC (1200ºF). All of the wood on the hobs had burnt as well as most of the coal bed. Within a couple of hours I was easily able to bring the temperature back up to where it had been before I went to sleep. I resumed firing and continued to the end.

The kiln was easier to fire this way as it had equalized and seemed very happy to have new wood after burning through its coal bed. When I unloaded, I was thrilled to see that the fine ash and the slow draught had wafted through the kiln to wrap the pots, even those in the back of the stack, in a light ash that melted and made a beautiful sheen on every pot.

I have since fired the kiln twice more using this same method. The only change I have made is firing higher before banking up. I now fire to 1090°C (2000ºF). I find that this way I can start firing early in the morning of the first day and go to sleep sometime before midnight. Then I can pick up early the next morning and finish sometime midday that day. This works well with my post-firing schedule that includes an additional eight hours of reduction cooling.

This is definitely a workable solution for me. The results of solo firing have been wonderful, invigorating, and have provided me with the satisfaction of knowing my work is truly of my own making. 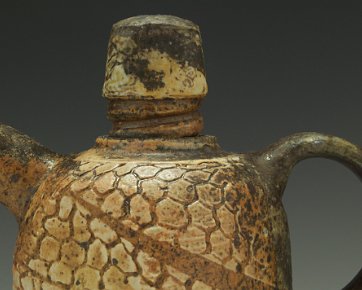